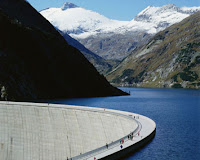 Monday of last week was the crucial PCC vote on changing our electricity supplier. I had given everyone a briefing from which my 1 September blog on this subject was written. I was recommending Ecotricity because it is investing in more renewable energy sources than any other company in this country and because it is significantly cheaper than Good Energy. To my surprise, despite the impending rise in the parish share and other strains on our budget, the general feeling was that if we're going to do this we should opt for whatever is genuinely greenest.

The coal and nuclear contributions in Ecotricity's so-called 100% green option caused concern among many. Eventually we voted not on the specific company but on whether to change our supplier and this was carried by a signficant majority. Three of us were then asked to go away, do more research and present the PCC with 'the greenest option' at the next meeting. I do have a concern that there is no such thing as 'the greenest option', only better options from different perspectives. However, it's great that we're now on track to make a really significant cut in our financial support for carbon production.

A quick note on banking - it seemed to make sense to refer this back to the diocese since so many of Oxford's churches bank with NatWest and we would clearly make a bigger impact if we acted together. I've e-mailed the diocese's social responsibility officer on this and await the finance officer's response.
Posted by Joanna