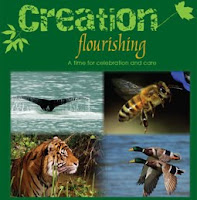 Last Sunday there was a lovely foretaste of the approaching harvest season with a generous quantity of apples, plums and damsons donated by Hugh and Judy from their garden for anyone to share - we've just enjoyed a plum crumble and some damsons and apples went into my husband's latest homebrewed ale.

Harvest season is also Time for Creation, or Creation Season, which we will again be celebrating through September and October. This year's theme is 'Creation Flourishing'. As the prayer team have decided to set up some prayer stations, including one in the central garden that is shared with the school, this will be an appropriate time to set that up.

One of our congregation has been inspired to build a greenhouse of plastic bottles so now we can reuse our bottles instead of merely recycling them. Unfortunately some of the other recycling has got a bit out of hand lately with people being away too much to sort it. We're thinking of stopping the foil and plastic bags now that it's much easier to do those elsewhere and trying to encourage people to take their batteries elsewhere too. The principal kitchen recyling is a bit of a problem since those of us who most often used to take bits home are all now so rarely in cars that we cannot take it with us any more: a new strategy is needed.

This weekend many of us will be at Greenbelt, hopefully picking up ideas and inspiration for responding to the current rather unhopeful outlook on climate change.
Posted by Joanna No comments: