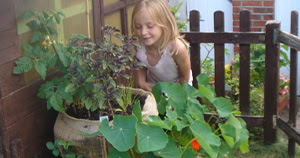 Christian Aid week has just finished. This year we finally decided to abandon the house to house collections that have become increasingly unpopular (I confess I've not done these since I arrived in Reading six years ago). Instead a dinner and auction of promises at the church was organised on 14th May. I couldn't attend but it was a great success and raised about £2,300 for Christian Aid thanks to some very generous people.

Next morning when we arrived for the service, the church was still decked with Christian Aid bunting and the flowers were beautiful in the CA colours of red and white. We had a visitor who is a conceptual artist working on a project which is tied in with Send a Cow. She is encouraging schools and other community groups to grow gardens in sacks and to communicate with others in this country and abroad with such 'bag gardens'. So, after the service we started our church bag garden - most of the work was done by the Exclaimers, especially the older girls who all attend St John's school and will be able to look after it during the week along with the school's own bag garden. (The photo above is from the Send a Cow site - hopefully I'll have one of our own to put there soon).
Posted by Joanna No comments: 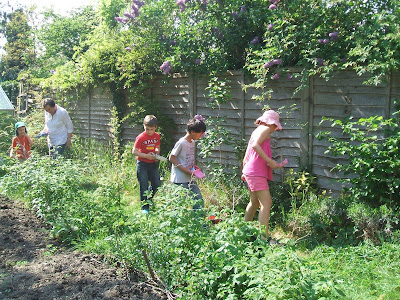 On the Saturday before Easter we held an Easter Egg hunt for Scramblers/Climbers and Exclaimers in our garden followed by a picnic tea. It was so sunny I was worried the chocolate would have melted before they'd all arrived and decorated their egg boxes (we were using the Divine Dubble Easter Egg Hunt kits from Traidcraft). It was pretty chaotic and we were still finding missed eggs several days later in the garden but three of the Exclaimers reported this morning that it was the highlight of their Easter holiday.
Posted by Joanna No comments:

For this year's 'green team' Worship Together service we decided to hold a traditional communion service but go outdoors. It must have been about the seventh gloriously sunny Sunday in a row and I couldn't quite believe we could be so lucky with the weather. We don't have a churchyard, just a courtyard at the front between the small garden and the church but this has low walls part way round mirroring the shape of the church itself and it worked really well with benches and a few chairs inside. We couldn't get the microphone system working but since we were much closer together than usual (and the double bank holiday had reduced numbers) it was fine. In fact it was rather nice to have a service not dependent upon technology (aside from the computer that prepared the service sheets initially).

We followed the usual Eastertide communion service with a couple of additions to keep the children's attention -
at the confession we asked the children to write 'sorry' in chalk on the ground and after the absolution we washed it away again, explaining that God had washed away our sins (many of the adults said they found that very powerful to witness)

while Richard was preaching - on the gardens that were the sites of fall and Resurrection - Emma painted a large picture of the garden with the tomb in (assisted by Ben the human easel). This kept my youngest son rapt, just as good as TV it turned out (for those more restless, chalk drawing kept them quiet still).

After coffee fifteen of us set out to cycle along the canal (including a couple of passengers). It was quite beautiful, all the leaves lush with the brightness of spring despite the very summery heat, damselflies flittering across the still waters etc. We arrived at the lock near 'The Cunning Man' just as the first of those who'd chosen to drive and walk did so - Dino on his crutches! Eventually our number was doubled and it was a lovely way to spend the afternoon, especially the sharing of homemade breads and cakes (plus homemade wine from Reading-grown grapes, albeit rather warm), while watching the orange-tip butterflies and the five-year-olds darting across the lock.
Posted by Joanna No comments: