Hugh tells me that Ecotricity CEO Dale Vincent was on Broadcasting House this morning and well worth listening to. Their decision not to join in the Big Six's price hike is much appreciated since our church uses their electricity. It also means that their 'frack free' gas is now cheaper than that of the Big Six (they're working on building green gas mills in Britain so hopefully more people will get on board and make this possible).
Posted by Joanna No comments: 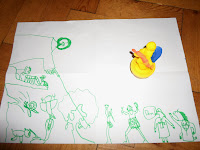 Once more at St John's we have been celebrating Creation Season over the months of September and October (rather than returning briefly to Ordinary Time between Creation and Kingdom seasons). The children's work has been re-organised so that the service for all the family (first Sunday of the month) is a communion service and for this year they are themed on the seasons of the church's year, naturally beginning with harvest. The week before that we have Children's Praise Plus - all children together in the refectory for songs with the worship group followed by craft activities that can be used for the following service. The second sunday I lead: all the children over 3 are together for Godly Play. For the two Godly Play sessions of Creation Time we looked at the two Creation stories (I had to invent the script etc for the second one and included the fall and expulsion) - it was a chance to talk about the value of these stories even if we don't take them literally, what they tell us about the world as a gift to treasure, of attempts to understand suffering and of the impact on the many of greed/power grabbing by a few. I was interested that when asked how God felt about the eating of the forbidden fruit most of the children spoke not of God's anger but God's disappointment and 'heartbreak'. The moment when God provides clothes for Adam and Eve as they leave Eden made a big impression and is (allegedly!) depicted in the picture above, along with a playdough angel wielding a flaming sword.
Posted by Joanna No comments: 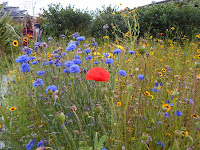 Over the summer there were several events organised by members of the congregation to encourage people to enjoy our beautiful world together - a picnic, a walk and a cycle ride. My family were away all summer but I understand the walk was particularly successful. We came back to that wonderful season when people bring in their excess crops to share and benefited from pears, damsons and grapes - thank you!
Posted by Joanna No comments: 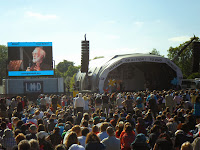 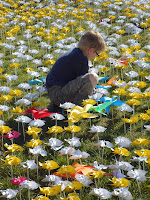 Last June 8th many of the congregation joined the Enough Food for Everyone IF demonstration in London. It was an inspirational event and the sort of occasion, like Greenbelt, for bumping into lots of old friends too. I've been disorganised on my photos, hence the long delay in posting this. I did write more fully on the church facebook page at the time. 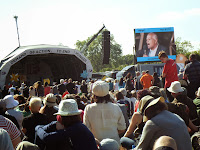 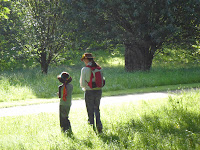