The Age of Stupid

The Age of Stupid showing went off without a hitch on Thursday. With my usual failure to think numbers I forgot to count the audience but we think it was about fifty which is fantastic. Probably two thirds were congregation members.

I'd picked up lots of cakes at the Early St Peter's Toddler service the day before so they went down very well and I'd also put up a display of a few facts/figures/graphs about climate change and possible responses - I have to admit I didn't expect it to be read as much as it was (I even had to photocopy a piece for one attendee) so I've left it all up there for the week.

On second viewing (as Matt Freer said) it didn't feel so angry and I think I got more out of it. Afterwards I advertised the Eco-veggie fayre which will be held at Reading Town Hall on 19th December and includes a showing of the film. We also encouraged people to join The Wave climate change march on 5th December. Then I encouraged people to talk it over with their neighbours rather than going bleakly out into the night, and they did talk for a long time! All the feedback I got was very positive (albeit with some despair about how to respond). John Madeley said he'd like us to try to get every church in Reading to show it. Next up will be Tilehurst Methodists who are showing it on 9 December.
Posted by Joanna No comments:

The Age of Stupid - advertising showing 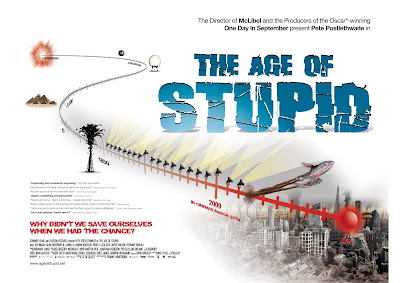 It's certificate 12A. I'm hoping to be showing it with subtitles on.
Please join us and bring a friend.
Posted by Joanna No comments: