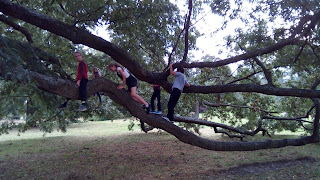 We've enjoyed two really excellent sermons for the end of Creation Season. Last week's was part of the series on understanding what is happening in the different elements of a communion service and was focused on the Eucharistic prayer itself. It included some beautiful lyrical moments and environmental theology. The week before's was responding to the reading on Jesus's words to the Rich Young Man and it was one of those sermons where I find myself sitting on my hands to avoid applauding at the end. Richard didn't actually use the phrase Joy in Enough but the concept ran through the sermon and he included some suggestions on embodying simplicity from a book by Richard Foster. He had also typed these up for people to take home at the end. They were:
1. Buy things for their usefulness rather than their status or prestige.
2. Learn the difference between a real need and an addiction. Then find support and accountability to regain "sobriety", freedom from addiction.
3. Develop a habit of giving things away.
4. Avoid unnecessary and short-lived technological gadgets that promise to "save time".
5. Enjoy things without owning them. Fore example, take advantage of public libraries and parks.
6. Nurture awe and appreciation for nature. Spend more time outdoors!
7. Get out - and stay out - of debt.
8. Use plain, honest speech. Say what you mean and keep your commitments.
9. Reject anything that oppresses others. For example, buy Fair Trade products.
Seek God's kingdom of love and justice foremost. If anything distracts you from that purpose, let it go.
Posted by Joanna No comments:

Here's how our survey result looks right now. I'd like to say we've been working really hard since the initial survey to move so far forward, but in truth I completely misread it the first time round - what I thought was grey 'not quite there yet' is really silver, so (having no more land than a driveway and a walled bed) here we are at bronze and it's time to send off the application form. The announcement was made at our harvest service.

Meanwhile 26 letters have so far been despatched to MPs as part of the Week of Action on Climate Change, we're trialing the use of far more Traidcraft products in church (needing to work out how to make up the extra costs incurred), and we've been thinking lots about Creation in the last two Godly Play sessions (Creation Stories followed by Fall Stories) - as usual I forgot to take any photos of the wonderful art work which included some great models of the Garden of Eden (helped by all the foliage I'd brought in).
Posted by Joanna No comments:

It's the second week of Creation Tide, beautifully reflected in the little bit of the main service I was present for. In Godly Play today we covered Genesis 1 and 2 - the first Creation Story is a standard Godly Play story that I've told often before (Creation presented as a great gift with seven images placed along a cloth) but this time there was more in the box: the second Creation Story. (Like the Abraham stories I used 3D figures for this - rather than the 2D for non-historical stories - but it helped make a contrast that at least one of the children was enthusiastic about). I asked them to wonder why we have two stories and what we gain from each. It was also a great excuse to use up some more of the rather large amount of clay we had left over from last week - their models included a veloceraptor with its nest and a couple of pokemon.
Posted by Joanna No comments: 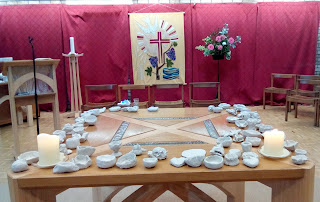 Today, on the first Sunday of Creation tide, we were invited to remember God creating us out of clay, with our Old Testament reading from Jeremiah. When the meditation instructed us to break apart the pots we had made it felt a bit of a shock, but these were the eventual creations.

Over coffee afterwards many of us signed Traidcraft's Justice Matters petition. If you missed that, you can sign up online.
Posted by Joanna No comments:

Last Sunday, over coffee after the service, the congregation were invited to listen to a debate of the sort that regularly happens in the church cafe between Fr Vince and Hamish about theology and social justice. It was fascinating and thought-provoking stuff. The occasion was to launch Hamish's new website  which Dominic has put together for him to make accessible various user-friendly digests of important books about the Powers which affect our world, to arm ourselves to respond intelligently to major issues that organisations like Christian Aid respond to. The website explains:


‘The Powers’ today are the big international corporations, the international financial institutions like the IMF and the World Bank and also the governments of the rich Western powers, particularly those of the US and the EU which includes the UK.
Churchgoers and those of Christian sympathies are all too familiar with the devastating effects of famines, wars, floods and other natural disasters around the world, and they commit themselves to offering support in the form of cash, practical help and in many cases personal work at disaster sites.
The activities of ‘the Powers’ are less well understood. Campaigning charities like Christian Aid and Global Justice Now draw our attention, fairly forcibly, to their more direct depredations such as the ruthless exploitation of indigenous people in areas where gold and other mineral mining take or to the exorbitant and unfair demands that big corporations make on poorer countries as the price for bringing them foreign investment.There is today a growing body of literature which sheds light on the activities of ‘the Powers’ not only in more detail than media headlines can convey but also revealing the enormous increase in their activities and influence over the past 30 years, much of it hidden from public view.

The website gives us the opportunity to understand the arguments without having to find time to read all the books.

This year Transition Town Reading are reviving the tradition of including a green festival at the same time as Reading's annual Water Fest:

Walk the Country for Christian Aid

Last Saturday was the annual Christian Aid sponsored walk near Henley and I'm proud to say St John and St Stephen's provided the largest single church contingent. Our Pathfinders group were among them and raised £250 between them (I don't know the whole total yet).

On Sunday 1st May St John and St Stephen's started a new green journey. As usual on the first Sunday of the month we enjoyed a delicious church lunch together (raising funds for Christian Aid this month). While we were waiting we took our cups of fairtrade tea and coffee and sat round in groups to answer the EcoChurch survey. Of the adults staying for the meal (just over 40 I think) almost all those who weren't cooking were able to contribute their opinions and thoughts. I'd printed off the survey so each group only needed to fill out one section. The immediate consequence was a small working party emerged to do some tidying up in our tiny garden patch.

Back at home I entered in the answers online and found that right now we don't qualify as an EcoChurch - despite having gold standard worship our buildings and lifestyle are only just bronze and our community & global didn't even rate that (which was quite a surprise - I'd expected us to be worse on lifestyle). Consequently a group of us met up last Monday to start a new plan of action. First step is responding to the Wildlife Trusts' 30 Days Wild which I'll be advertising in church tomorrow. 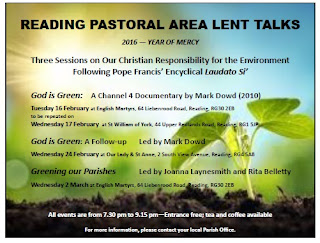 I've just finished putting together the slides for a talk this evening for the local Catholic Pastoral Area who have been organising Lent talks inspired by Laudato Si'. It's meant scouring back through the blog and finding a lot of happy memories.

As usual I've been somewhat behind with this blog - earlier in the year I was at St Paul's Cathedral (with Liz, the curate from Christ Church) for the launch of EcoChurch. At our last PCC I got agreement for the green group to fill out the EcoChurch questionnaire and find out if we make it to bronze these days. We'll probably do this after a church service so this needs to be planned out now.

In other news we at last have fabulous new bike racks of the type the cyclists asked for.
Posted by Joanna No comments: