On Thursday of last week I attended the inspiring launch of Oxford diocese's Food Matters project for 2013 so some of the material I picked up there is now up on the EcoCongregation notice board. Audio recordings of the talks given can be heard on the Food Matters website and the project's winter resources have been uploaded too. Food was the focus of this Sunday's intercessions at St John's which Pete led, inspired by the Enough Food for Everyone IF launch.
Posted by Joanna No comments:

Enough Food for Everyone IF 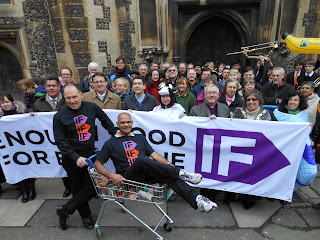 A dozen of the St John's congregation turned up on Friday 25th January to be part of the launch of a major new campaign to reduce global poverty, along with local MPs and activists from other churches plus a fantastic band from Leighton Park School.


Rev Robert Weston, of Park United Reformed Church explained the reason for the IF campaign:

‘The world produces enough food for everyone, but not everyone has enough food.
Hunger is the greatest scandal of our age.
This year, with the G8 coming to Britain, we can make a real difference if we act together and act now.
The aim of the IF campaign is to tackle the scandal that sees 1 in 8 people in the world go to bed hungry. The food system is broken. There’s enough food, but it’s not going to hungry people who need it to live. We know we can change this. All this suffering and death is preventable IF we persuade our governments to act.

Nearly 100 leading charities have joined together to demand an end to hunger. In June the G8 Summit comes to Britain. This is our chance to end the scandal of hunger. Our leaders will listen IF we act together and act now.’

The Mayor of Reading, Councillor Jenny Rynn gave her support for the IF campaign saying that this could be a major help in achieving the UN’s Millennium Goal to eradicate extreme poverty and hunger.

MP for Reading West, Alok Sharma, gave his full support to the IF campaign emphasising the importance of the government’s commitment to ensure that 0.7% of the United Kingdom’s GDP (Gross Domestic Product) is spent on international development and aid. This contribution helps to alleviate some of the worst poverty and hunger across the globe.

The Bishop of Reading, Bishop Andrew, reflected on his 9 years of ministry in Ethiopia, where he saw first-hand the impact of multinational companies on the lives of poor communities. The displacement of local farmers, to create vast fields of crops to produce biofuels is having a negative effect on the provision of locally grown food for people in Ethiopia, creating food shortages. Bishop Andrew encouraged the crowd outside St Lawrence Church, saying that together we can make a difference and build on the success of the ‘Make Poverty History’ campaign.

MP for Reading East, Rob Wilson, also gave his full backing to the project and drew attention to the scandal of food waste, a contributing factor to the global problem of food shortage. Rob has been involved in an innovative local project to use the fruit grown in local gardens, parks and allotments – which can be used to produce fruit juice, jams and other products.

The crowd of supporters were delighted to enjoy a piece of music written specially for the launch event and performed by students from Leighton Park School. The piece composed by Leighton Park music teacher Chris Mitchell is in a Latin American style, featuring brass and percussion, and the performance is named "Jubilee Shout".

Maranda St John Nicolle, co-ordinator of Christian Concern for One World was delighted with the level of support for the campaign in Reading; saying, ‘It is always encouraging to see such a vibrant community seeking to raise awareness of global issues. I hope others will want to get the message out there: the world produces enough food, but not everyone has enough food. IF we get together, we can make a difference and we can solve this problem.’

There will be Enough Food for Everyone….

To sign up to the campaign www.enoughfoodif.org
Posted by Joanna No comments: