Just back from Greenbelt 2017 - I know at least 12 other St John's members were there since we bumped into each other but among the 11,000 on site this weekend there were probably others. It was a glorious weekend - apparently the hottest August bank holiday on record which made it beautiful but was also a stark reminder of our increasingly extreme weather. The environment was high on the agenda with Christian Aid's Big Shift campaign - my family plus godsons very much enjoyed their Escape the Vault (although if I'd been on my own I think I'd still be in there). As usual Green Christian and Operation Noah were among the stall holders as well as Hope for the Future who help people and churches lobby their MPs on climate change. Moreover, Natalie Bennett was in no fewer than five sessions and the Most Revd Dr Winston Halapua, archbishop of Aotearea, New Zealand and Polynesia made seven appearances (I am now hugely appreciating his beautiful and intriguing book  Waves of God's Embrace). 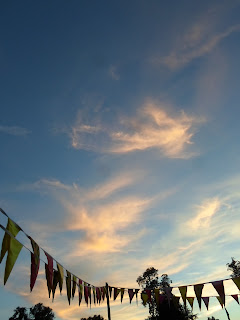