When Rosemary and I started discussing this service, we wondered about choosing readings
appropriate to the theme of Climate Sunday. But then I checked out those set for this Sunday in the Lectionary and immediately wanted to stick with them SLIDE -  "The Heavens proclaim your glory O Lord, and the firmament shows forth the work of your hands" - the opening lines of Psalm 19; we could have chosen them deliberately for a service about the climate and Christian responsibility for Creation care. It would never actually have crossed my mind to pick the Ten Commandments, yet once they were in front of me, I found my mind whirring with the thought of the Israelites planning their new society, unlike their existence in Egypt, God setting out for them how they would live in the Promised Land - and I found that picture meshing with all the talk of what will happen in our society post-Covid – SLIDE How many times have you heard the phrase building back better, the idea of taking this wilderness experience of lockdown and loss, and making it a precursor to a better way. The Wellbeing Economy Alliance SLIDE have even come up with TEN principles for building back better – all of these initiatives are looking for a way that properly appreciates our planet, that shares its resources fairly, that finally gets really serious about tackling the Climate emergency, that gets the hang of living in right relationship with nature and with each other. SLIDE could we too be on the brink of a new beginning? SLIDE – I took this screen shot in the course of Oxford diocese’s recent Environment strategy day.

I know many of us attended the Tom Holland lecture a couple of week’s back, and some were challenged by his assertion that Christianity could not inspire environmentalism because its world view is too anthropocentric, too focused on the idea that the planet was made for humans – Dave Bookless’s approach here suggests something very different. A Theocentric world is a world made by and for Christ in which humans are the keystone species, responsible to God for our fellow creatures. 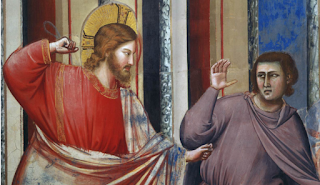 Which brings me to the Gospel reading. SLIDE It’s a challenging one, and I think the painter Giotto catches that brilliantly in this image –

it’s not how we expect to see Jesus. And it has always been a challenging story. Some early manuscripts try to soften the wording by saying Jesus fashioned ‘something like a whip’, not really a whip. There are scholars who argue the reference to sheep and cattle is a later insertion – surely Jesus was using the whip to drive out animals, not people? Wasn’t he? John’s version of this story is fascinatingly different from those of the other gospels – Mark, Matthew and Luke all tell of Jesus entering the temple, SLIDE turning over the tables of the money changers and those who sold doves and quoting from the Old Testament – Is it not written my house will be a house of prayer for all nations, but you have made it a den of robbers. There is no whip in these stories. And Mark, Matthew and Luke all place the event just after the triumphal entry into Jerusalem – it is a key step on the road towards crucifixion. These gospels record that the chief priests and the teachers of the law heard what Jesus had done in the Temple and began looking for a way to kill him – there is a direct connection between his action in the Temple and his death. But in John’s gospel the cleansing of the Temple happens so much earlier. We’re only in chapter 2 – he calls the disciples, he turns water into wine at Cana, and then he clears the Temple – his second sign, a message at the beginning of his ministry – it is still part of the story of Jesus’s death, made explicit in his promise to raise the temple, his body, in three days, but here it has moved right up front in the Gospel. Why is this story so important to John? And – why does Jesus take this dramatic, seemingly uncharacteristic step that triggers his death?

I rather suspect that 2000 years on we cannot come up with a definitive right answer. There are, of course, a variety of interlocking theories on this involving the abuse of Temple tax, the way the poor or Gentiles were being excluded and so on. A couple of weeks ago I came across an approach that was new to me - it so happens that this Lent I’ve been reading a commentary on John SLIDE Entitled An Earth Bible Commentary. It’s subtitle is Supposing Him to be the Gardener – a phrase which picks up on Mary Magdalene mistaking Jesus for the gardener after his resurrection. The first chapter of the commentary begins with examining what Jews at the time of Jesus thought about another, earlier, Garden – Eden –It turns out that the Temple was commonly identified with Eden – some suggested the Temple was on the site of Eden, others saw it as a manmade reconstruction of it in which the burning incense brought to mind the scents of Eden’s flowers. Expanding on that, for many writers, the Temple was also a representation of the whole of creation – its three parts mirroring sea, earth and heaven – there’s lots of detail I won’t go into. But it adds intriguing layers of meaning to Jesus’s response to the traders in the Temple. SLIDE

The commentator invites us to consider that, here I quote “The temple was supposed to symbolize the world as God’s Creation, instead it had become a reflection of its functionaries’ view of the world as a resource to profit from”. This view of the Temple as a resource to profit from, was obstructing God’s people from encountering him, preventing them from living in right relationship with him. 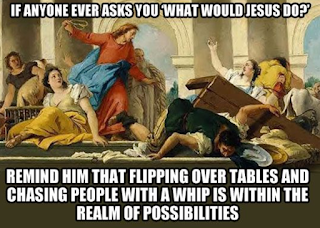 SLIDE For some people this is a funny internet meme . . . . SLIDE For others, it is a call to direct action when the world is so far from what it is meant to be.

In today’s context, of Climate crisis, there are a million ways in which we can act positively, to turn our backs on seeing the world as a resource to profit from; to set our house in order in a way that prioritises justice. Some of the most effective are also startlingly mundane. SLIDE there are all sorts of ways to measure carbon footprints – this particular model divides transport up and puts it into categories like food shopping or holidays to get more of a sense of the purpose of use - however you do it, household energy and food are a big proportion. Several of us at St John’s have been attending Citizens UK meetings and recently encountered their initiative to tackle fuel poverty and the climate emergency in the same brilliant scheme. SLIDE Many people pay far more than they need to for energy bills because they have stayed with companies who take advantage of loyal customers and hike up prices, pushing them into fuel poverty. But some of the recently established green energy companies are committed to not making these unfair price rises and not having exit fees – their electricity is 100% renewable, their gas is carbon offset and if you use a referral code you can get £50 of your first bill. As a church we would like to encourage all our members to swap to a genuinely green energy supplier. There’s more about this in the most recent NEWT and on April 18th we’ll be holding a Fair Energy Switch Event after the service if you’re interested but would like someone to help you work through the process with you. Switching your energy supplier is the single biggest thing you can do to cut your carbon footprint, and it may very well save you quite a lot of money.

Food takes a bit more thought. SLIDE A quarter of global greenhouse gas emissions come from food – about half of that is from animal products and about half of those are beef and lamb. But how food is produced makes a huge difference – typically European beef is responsible for only one third of the emissions of South American beef. SLIDE Dark chocolate is much better than milk chocolate and either way Rainforest Alliance or Fairtrade marks will ensure forests aren’t being cut down to produce the chocolate. When it comes to the packaging of food, If you haven’t noticed yet – SLIDE the RISC World Shop on London Street has opened a zero waste section to their shop– they’re open every day except Mondays. It’s easy to forget that what you do to the food at home is sometimes responsible for more emissions than production SLIDE if you fail to put a lid on a saucepan, 20% of the energy used in cooking is simply wasted. If the gas flames lick up the sides you can waste another 20%. But if you stack veg up in the steamer, or put different types in together, you cut energy use. SLIDE If the oven’s on anyway, what else can you cook inside? Sometimes life just feels way too busy to stop and think about all the tiny ways that everyday we’re taking resources from the planet that we really don’t need. SLIDE But the fairtade foundation launched a report last year which says that  by 2050 they expect 89.5% of the land currently used for cocoa production in Ghana and Cote d’Ivoire to have become too hot to keep growing, half of the world’s chocolate supply come from there – that’s just one example of the world we’re heading for.

SLIDE Suggesting to our friends that there are easy ways that they could cut their carbon footprint might feel rude, inappropriate, insensitive when life is tough and busy, but the case is so urgent, please think about encouraging others to act too, perhaps think of it as turning tables over.