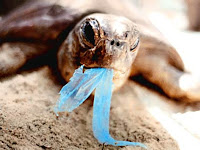 I've recently stopped collecting the church's plastic bags and wraps for recycling. Unfortunately I simply couldn't find time to sort it all out which meant that we were gathering a hazardous amount of plastic in a two-year-old's home, plus it was getting costly to post off. Part of the problem was the large quantity of unsuitable plastics that appeared, especially so-called 'degradable' plastic which is apparently actually made of tiny particles of plastic (which never will break down and are therefore a pollution hazard) bound together with starch which must not be mixed with polythene in the recycling process. After the last sort out my bin was looking disturbingly full.
However, I've just found out from the Christian Ecology Link e-mail group that the plastics I was previously posting can be put into recycling banks at Sainsbury's. Consequently I'm hoping the congregation members who got into the habit of collecting will continue to do so and have just sent off the following message for inclusion in next week's notices:
Plastic Recycling: Please don't stop collecting your plastic to recycle, but please sort it carefully. HDPE (2) and LDPE (4) or bags which say they are recyclable polythene can all be put into the plastic recycling bins at large Sainsbury's stores. They can also be posted to PolyPrint Mailing Films Ltd, Unit 21a Mackintosh Road, Rackheath Estate, Rackheath, Norwich, NR13 6LJ ()1603 721807). It is essential that you do not include 'degradable', 'biodegradable', 'oxydegradable' or compostable film - this all contains starch which messes up the process and will ruin the entire batch of plastic. Please also carefully cut off any paper labels which will block the machinery.