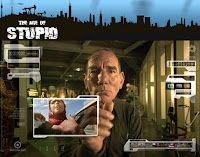 Just back from a showing of The Age of Stupid - I'd been thinking of arranging a showing fo our congregation and community, but have not been persuaded. It starts very powerfully so I had almost immediately stopped noticing the oppressive heat in the room and probably cried the first time about ten minutes in - over a glacier.

But eventually I realised I was feeling bombarded with anger. I suppose the title should have been a warning of the anger behind it. It was at about this point that several folk walked out. It did then calm down somewhat but I ended up disappointed. By saying that 2055 would see humans on the verge of extinction I felt they were being unhelpfully extreme. It gave too much scope for people to refuse to believe.

There was lots of good stuff in it (I'd have been happy just to watch the wonderful French mountain guide) and lots of heart breaking stuff, especially the Iraqi kids. I had hoped for a more coherent exploration of what climate change would mean for the world. Certainly it is powerful and if some people find themselves inspired to radical action by it then that's fantastic, but I don't think I'd be happy to see it shown in all schools as some have suggested.

On the subject of climate change and coherent explanations, Jo Jamison at Operation Noah has made a very helpful five minute radio piece on the refugee crisis that will result, here.
Posted by Joanna