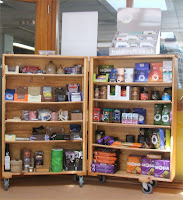 This evening was an opportunity for churches in our deanery to 'show off' good practice/interesting initiatives to neighbouring churches who might like to do similar things. So we at St John's had our nifty Traidcraft cupboard on display - it's on wheels and opens out with all the goods ready on the shelves so makes organising the stall so much easier than laying out a table every week. Richard made it and is happy to send the plans to anyone who wants them. We leave an honesty box on the top and in 2008 sold £4800 of goods. Next to that was a display about Eco-congregation, including Operation Noah arks and petition. We had some really good chats, although I was also surprised by some folk's reluctance to sign the Operation Noah petition to reduce power station emissions ('What do we use instead?' being the response). The evening included a barbecue - for some reason folk just looked at me and said 'you're a vegetarian' - luckily there were plenty of veggie burgers and I was promised that all the left over food was destined for a good home with the scouts.
Posted by Joanna