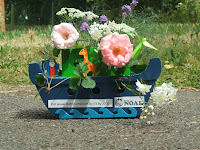 It's the East Reading Festival this week, including an art exhibition and flower festival in St John's Church. So, I volunteered to do an EcoCongregation flower display (perhaps not wise for someone whose rare attempts to arrange bouquets in vases tend to be comic rather than attractive). I borrowed one of my sons' several arks as the basis and filled it with plants from our garden. Unfortunately I had no idea how long oasis should be soaked for and transporting the entire arrangement by bike was a little tricky. The image above bears only a passing resemblance to the arrangement now in the church (on arrival I abandoned the fennel that was already wilting and yesterday morning I had to pluck out the soggy roses and dried up strawberry runner, substituting flowers from the church forecourt garden, so that there are now no food plants in it, unless you count lavender, but based on the lavender cake I once I ate, I don't count it!). The accompanying text reads:

The plants in this display were all organically grown in and transported by bike. Some are wild flowers and some are cultivated. Some are for healing, some for eating and some are simply beautiful. They represent the bounty and generosity of God’s created world.This ark is a fairly traded toy from belonging to a five-year-old in our congregation.

Christian Ecology Link have launched the Operation Noah campaign to protect our rich wildlife and the world’s poorest people from climate change. If greenhouse gas emissions are not curtailed soon there will be no summer sea ice at the Arctic before this ark’s owner is eighteen and before he is fifty the number of climate change refugees, some arriving here, will exceed the combined populations of England, Germany and Italy (at the most conservative estimate).

In a time of climate crisis, Noah was ‘a man who walked with God’, listened to the warnings and acted. Today we are all called to act as Noah did.


On my arrival with the display Oasis (which I'd missed due to a dental appointment) were finishing off their contribution and my youngest son helped to add the 'desert' sand around it - their's was all taken from the forecourt garden which they'd just been tidying for the festival (I did try photographing it but it's a lousy picture).
Posted by Joanna