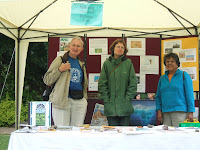 Reading Christian Ecology Link (Churches Together in Reading's Environment Group) again held a stall at Forbury Fever this year. FF is the council's environment day in Forbury Gardens. On previous years it has been held on the Saturday closest to World Environment Day but this year was held later in order to coincide with Reading Water Fest nearby. This seemed to attract more visitors or perhaps it was the addition of a stage in the gardens on which there were various displays of dancing etc. The weather was also much better than last year! At our stall we focussed on climate change and biodiversity. For the latter we had a large 'treasure island' map for people to hunt for wildlife treasure - they would often be told 'no treasure here' due to habitat loss (but everyone was allowed to keep trying until they'd won a fairtrade sweet). We also had a display based on Genesis 1 with observations on species loss and actions we might take to protect those surviving. For climate change we had literature from various development agencies and Operation Noah, campaign cards from Cafod and a display about some of the consequences for people in the developing world. As last year, we also displayed leaflets from Reading Islamic Trustees for the Environment and one of their members joined us for a while on the stall.
My sons considered the highlights of the event were the Heatseekers van (where they got to see the technology that measures homes that are wastefully losing heat) and handling slow worms and moths on the econet stall. I was certainly inspired to promise them we'd set up our own light trap for moths as soon as we have a free evening.