Making bird feeders (and hospitality for a heron) 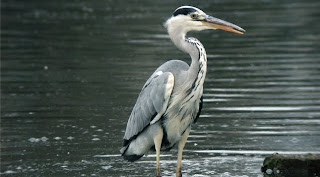 The snow has all but gone and happily all the bike racks were full again this sunny morning.

This term at Exclaimers we're looking at some very different Christian figures from the past. I'd volunteered to do St Columba this week. Looking through his story I was struck by the tale in which he prophesied the arrival of a 'guest': a storm tossed heron which would need care and feeding for three days. Among today's other activities, consequently, we made bird feeders - not that herons will be interested in these, but we've been encouraged on Radio 4 to help the birds through the cold and at the end of the month it will be the RSPB's Big Garden Birdwatch.

I've usually read that the lard in bird cakes needs to be heated but actually mashing with your hands works fine and avoids all the health and safety concerns of heating it. We stirred in a seed mix with meal worms plus some raisins and filled old yoghurt and cream cheese pots (we put plasticine under them and then pierced a hole through so we could poke in string to hang them from). These will need to go in the fridge for a while to set. Then we made strings of monkey nuts too. With my own, younger, kids later we made some more and found for them it made sense to pierce holes through the shells and then let them use plastic tapestry needles to pull the string through. We also made feeders with pine cones - squashing lard in and then rolling them in the seed (in the past I've done a veggie version of this with peanut butter but it isn't easy to track down unsalted peanut butter at short notice).

Since I stopped going to Oasis during the week I've been lousy at keeping an eye on the bird feeder at church. It appeared to be in the office one week and I don't know where it is now - an instance where I need to get round to delegating. The recycling seems to be happening most of the time which is great. I've stopped taking coffee grounds home due to spillages and disorganisation but these are now going into the green cone (although I think I need to put up some guidance on using the green cone as many people do not realise that the waste should only fill the sunken basket, not the cone itself).
Posted by Joanna