Harvest Festival - how to feed 6 billion 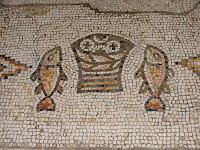 On a strangely warm, very rainy morning we had a smaller congregation than usual for Worship Together (a number were at the priesting of a former congregation member) but we did have the cubs and plenty of children. About forty people stayed afterwards for our vegetarian meal (with salads from my Riverford veg box) - we'd been preparing for 60+ so everyone ate very well indeed and salads and bread were taken back for a student lunch tomorrow.

The theme of the service was the world food crisis, using materials from Christian Aid and Tearfund to explain this as well as inspiration from John Bell's talk on miracles at Greenbelt, specifically the feeding of the 5,000, to prompt thoughts about our response. But we began with lots of wonder and thanksgiving and a reminder that this is Animal Welfare Sunday. As people came in, lines from Psalm 148 were on the screen to set the tone:

Leader 1:
This is a time to celebrate God’s abundant gifts to us. Let us begin by saying together the prayer on the screen

God of ripe plums and meadowsweet, thank you for summer.
Thank you for warmth and beauty and wonder and rain.
Thank you for life (slightly adapted to suit this year's wet summer from Ruth Burgess's Bare Feet and Buttercups)

Song: Our God is a Great Big God

Leader 1:
Some of this service has been inspired by the weekend many of us spent at the Greenbelt Christian Arts festival in August – its theme was Rising Sun
cubs threw a soft earth around a bright sun
The earth orbits the sun astonishingly at just the perfect distance to sustain life. The earth’s circling forms the seasons whose cycle produces our glorious harvest.
Throughout history Christians have played on the word sun – meaning both the star of our solar system and the son of God, Jesus. This flaming ball gives us light and life, our physical energy, our food; spiritually it is Jesus who gives us light and life.
The cycle of death and rebirth in the sun’s seasons also echoes Christ’s story: death and rebirth to give us life
I’d like to share with you a song on this theme which is one of James’s favourites – and for this please can I invite children (especially small ones) to come to the front and lie down, as if you’re playing sleeping lions – there will be a time to leap up and jump for joy – you’ll know when. Those not lying down, please join in from your seats with the words on the screen.

Song: Sad, sad day (from Julia Plaut, Jumping for God - this was even more popular than I'd imagined)

Leader 2:
Children were given large cut outs AOKTNYHU - the congregation had to guess what they were supposed to spell and then tell children to move left or right accordingly until it read THANKYOU. Each child was asked their favourite something - colour, food, flower, fruit etc The congregation were given small cards and pens to make 'thank you' cards for God.

Harvest gifts, cards and collection were brought up as music played.

Hymn: We plough the fields and scatter

Leader 1
God’s Creation is so plentiful, over abundant. Even with six billion people on this planet, this year enough food was grown to feed all of them according to the UN. But not all were fed. For millions of people in the developing world food has become unaffordable.

Leader 3
Two 'families' were given shopping bags of food to lay out on a picnic blanket before them - one a typical day's food for an ordinary family in England, the other the equivalent for Bangladesh (based on the most recent issue of Christian Aid's magazine)
Leader 1
Every day 25,000 people die of hunger and hunger related diseases
Asked the congregation for suggestions as to why there is such a food shortage and answers were typed up to appear on the screen
A picture of WALL-e was shown on the screen - the children were asked who he was and what he did . . .
human overconsumption has made the earth uninhabitable. 700 years after humans abandon the planet a robot probe discovers that photosynthesis has begun again – (plant in boot lifted up from behind lectern) a tiny plant in an old boot becomes the emblem of hope for life on earth: for the restarting of seasons and harvest. I place that here now as we say sorry to God for what we are doing to our planet and our neighbours. Let us say together the words on the screen.

'Reading' Mark 6:30-44 (memorised and delivered with some drama and an unplanned crowd of playing children)

Leader 1
One of the speakers at Greenbelt was the Iona community’s John Bell who spoke about the challenge of Jesus’ miracles. He spoke of the feeding of the 5,000 and a popular theory that the offering of loaves and fishes prompted others in the crowd to share their food too. This he suggested would have been a miracle of moving from possessiveness to generosity that has yet to be achieved in our world. But then he asked, is it harder to believe that Jesus could feed 5,000 people, or that the people of Britain could throw away 40% of their food while the people of Haiti eat mud cakes?
Is it more astonishing that Jesus could multiply those loaves and fishes or that a quarter of British children are overweight and obese while half of Indian children are undernourished?
This of course is a tragedy for Britain too. We have lost our sense of the value of true food because we are bombarded with apparently cheap food produced at high cost to animal welfare, to the environment, to its producers, to the migrant workers packing it and often to our own health. And it is our poorest who suffer most too
The miracle of the feeding of the 5,000 challenges us to ask, ‘how can we fairly feed 6 billion?’

We have some visual aids:

Children then wheeled in a series of wheelbarrows with props to prompt suggestions:

A veg box – [On the screen]: Locally grown food means less fuel has to be burnt to transport it. Anything that reduces greenhouse gas emissions is crucial to stop the floods and droughts that are destroying food crops. Organic food like this does not use nitrogen fertilizers which contribute to climate change and damage eco-systems.

Campaign cards - Poorer countries are trapped by world laws made by rich countries to benefit rich people. Organisations like Tearfund, ChristianAid and Traidcraft have lots of campaigns to change this horribly unfair system. After the service, please take a card or two from this barrow and act on them.

Vegetarian food and recipes - meat requires far more land and water to produce the same amount of protein as grain or beans. Much of the ‘greenhouse gas’ methane is produced by cattle. Moreover, most of the recent destruction of the Amazon rainforest has been caused by cattle ranching.
Apples from people's gardens to share - Sharing our harvests, as Hugh and Judy shared their apples, and sharing our possessions builds community, avoids waste and leads to lower greenhouse gas emissions

Empty barrow - We simply need to consume less. Everything we buy new causes more carbon emissions. What we throw away causes methane emissions or other poisons in the land. We can also buy more frugally – Reading market is often selling supermarket rejects and the Scouts will be having a jumble sale next month

Barrow of money and giving leaflets - on screen with images and read out
None of us have barrows full of money but the poorest of the poor need help from Tearfund and Christian Aid who depend upon us
At Greenbelt we saw how they are helping the people of Burkina Faso, where climate change has brought a 30 year drought and turned fertile land to desert
£62 pounds pays for a day’s training for a whole community in drought resistant farming techniques like building rock belts to hold in water . . .
£7.50 provides a farmer with enough drought-resistant millet seed to harvest a year’s food for four people - from the desert.

One more thing we can do – we didn’t put a barrow for this because I thought it was becoming a health and safety hazard, but it is just as important, it is to pray.
Let us offer God our hopes and our fears in prayer now

Creator God, please give us the strength and the imagination to help feed all the people on your planet

We pray for Britain’s farmers, we pray for the poor in Britain, and we pray for everyone affected by the current financial crisis.

We pray for those across the world who are hungry, and those who hunger for justice..Bring them peace, we pray, bring them food.

We pray for your beautiful planet and all its creatures

We pray for politicians all around the world – guide their decisions

We pray for Alison Wilkinson in Nepal , for Rowan and Matt in Bosnia; for Eddie Orme being priested today and for all those from this congregation working to build a fairer world.

We pray for all people we know are ill, or sad, confused, or lonely

Creator God, this earth and everything in it are miraculous and beautiful. Throughout history you have moved people to do amazing things for the sake of their neighbours. Inspire us now to stop climate change and to build a fair world for people and animals, a world where your will is done as it is in heaven. Amen.


The feeding of the 5,000 is a miracle of hope. Faced with all those tired and hungry people the disciples shared what little they felt they could spare, for an apparently impossible task. In the end it was more than enough. Through small steps with God miracles occur.

Over coffee we showed a Tearfund DVD
Posted by Joanna