I finally made it to the last instalment of this year's Lent film festival - Captain Fantastic - about a family brought up in and idealistic wilderness, coping with the outside world. Much more light hearted than probably most of the films over the years, but still food for a lot of discussion afterwards - so many dilemmas in parenting. As Harper lectured Ben about whether it was appropriate to talk to the children about their mother's depression and suicide the scene cut suddenly to a violent video game and it felt a bit like being punched in the stomach. Online lists of film quotes include the lines "What's cola?" "Poison water", but not the follow up which I wish I could remember properly, to the effect that they were leaving the roadside cafe because it didn't sell actual food. 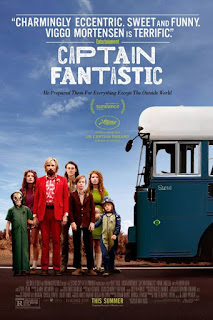