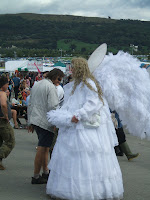 Greenbelt now seems rather a distant memory, but I mentioned it in the last post so might as well up date. This year did seem a bit disorganised compared with usual, plus I was probably more disorganised and somehow managed to miss most of the art on display. As for my hopes of being reinspired about tackling climate change - compared with last year it felt the subject was barely being whispered. Admittedly I still plan to download one talk on it that I couldn't make but it did feel a bit disappointingly as if we don't know what to do after Copenhagen's failure.

But on the good side, Rosemary reported how inspirational Bruce Kent was, still optimistic and persistent after all this time; I heard Clare Short urging action on Israel/Palestine; Earth Abbey were present foraging again; my youngest spent a long time making paper windmills for Christian Aid's wind of change harvest campaign (enjoying the story of the wind-powered well in Afghanistan) while my eldest struggled to comprehend the tax system in Christian Aid's maze, and we all appreciated the Mother's Union's free and fun games heralding their very important Bye Buy Childhood campaign. Their president, Reg Bailey, reported that each year £99bn are spent in the UK on child orientated products so that marketing aimed at children is big big business and consequently, as the MU website caption reads, 'our kids are growing up believing they are what they own'. Obviously this drive for consumption has serious environmental implications as well as causing damage to children including stifled mental development and poorer health as well as family conflict (sometimes deliberately and explicitly fostered by the marketers).