A channel of God's Peace: anti-nuclear campaigning and Franciscan poetry 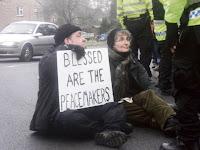 On 14 February the Exclaimers were looking at St Francis (not with me). Together three of them wrote this poem:

our brains are dead
our books aren't read

games consoles
suck out our souls

use our visa
day trip to Pisa.

DSI in the sky
PSP or nintendo wii

Trainers from Nike
to ride my bike

Stop a shooting star
with a chocolate bar.

Take ur valentine
out 2 dine


That evening the church was filled with campaigners from across the country and abroad for the demonstration against the Atomic Weapons Establishment at Aldermaston on Monday. Some 300 of them were fed vegan meals in the church on the Monday and many slept on the floor in the church itself and in the school hall on Sunday and Monday nights. Some were from Christian CND, some were not Christians. Ali, one of our Ministers who was present at the demonstration too, reported the very special atmosphere in the church over that time and the awe many felt at sleeping in a religious building.

The demonstration itself was a peaceful occasion with some 800 people present, including our bishop, Rt Revd Stephen Cottrell. According to the Church Times, he said that the renewal of the Trident nuclear weapons system was “a matter of principle from a Christian point of view”, and there were “no circumstances you could imagine using these weapons; therefore there is no justification for owning them”. He also questioned whether the UK was in breach of the nuclear non-proliferation treaty, as, although there would not be an increase in the number of weapons, their overall capacity would be much larger. “The real needs of security of a nation are not serviced by nuclear weapons, and I don’t think ever have been. People are really questioning whether they are the right solution for the 21st century. What right do we have to say to other countries they can’t have them when we are busy investing in them ourselves?”
(The picture above is from the Church Times Website)
Posted by Joanna