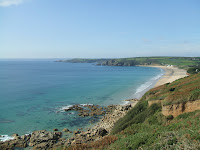 We welcomed two home groups to our front room a couple of weeks back to watch the film Home (lucky we live in a clergy house). It is a very powerful film and does offer a bit more hope than Age of Stupid towards the end. As long as 'we still have half the world's forests' counts as hope? For me its greatest strength is that it makes it more obvious what it is we're fighting to protect because it is stunningly beautiful (in its shots of people as well as, primarily, landscapes). As far as I noticed there were no shots of British countryside, so since I happened to be on the Cornish coast a couple of days later, that's what this picture is of.

October is a busy month in the run up to Copenhagen - upcoming events in Reading include an event at Caversham Heights Methodist Church at which CAFOD's head of policy will be talking about the importance of acting to avert climate change at 7.30 on Friday 16th. This will be one of a number of Stand Up aganist Poverty events that weekend. Then on Thursday 22 there will be a Tearfund Climate Justice Evening to equip people to respond to the crisis.
Posted by Joanna