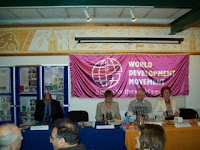 Last night there was a hustings for our MEP candidates on issues of trade justice and the environment, organised by Oxford World Development Movement. Our home group normally meets on a Thursday so we decided to attend the hustings instead and ten of us made it. The largest room at the Reading International Solidarity Centre was packed and there was some heated debate at times (especially regarding Israel). There were representatives from UKIP, Green Party, LibDems and Labour (the Conservative rep was unable to attend). I was especially surprised by how many of the candidates opposed agricultural GMOs and also nuclear power (on the grounds that it cannot be brought on stream in time to make the difference needed, is too much of a security risk and is not that efficient) and was interested to learn about the possibility of micro nuclear power stations (enough for a village, buried so deep underground that there is little security risk [too little there anway] and decomissioning problems are apparently avoided). I was also interested to learn of concerns among MEPs about a lack of transparency about lobbying from religious groups (specifically the Vatican) and encouraged by reference to the importance of aid channelled through civil society, specifically church groups (this from a candidate I would not be supporting).

The above image is copied from a Green Party member's blog on the evening.
Posted by Joanna