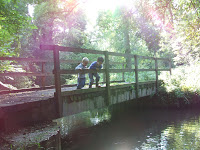 On 17 January Tilehurst Methodist Church organised a day to help encourage members of other churches to become more involved in environmental responsibility. I rashly decided to cycle, having forgotten that Tilehurst is on a hill, so I missed the opening prayers but made it just in time for the very interesting panel of speakers who opened the day.

The panel was chaired by Mark Dowd of Operation Noah (whose film God is Green will be on channel 4 at 8pm Monday night or can be viewed on their website).
The panel members were Dr Paula Clifford, Head of Theology at Christian Aid
Rev Prof Ian James of Reading University's Dept of Meteorology and diocesan adviser on the environment
Ruth Conway of Christian Ecology Link and the education group of the European Christian Environmental Network
Prof Sir John Marsh, Methodist local preacher and former Professor of Agricultural Economics
Maggie Ross, an Anglican solitary who divides her time between Alaska and Oxford

When asked what aspect of Creation most inspired them it was Ian James's response that resonated most with me - a lyrical moment of sunshine breaking through clouds onto the landscape of the Lake District which he later found encapsulated in R.S. Thomas's 'The Bright Field' (see below), whereas Maggie Ross described an Alaskan view of the aurora borealis. But for Paula it was 'the face of Christ in the poor' and for the others it was children.

There was some tension in the responses to the question of how we should understand the word 'dominion' in Genesis 1:26. Paula argued that in addressing climate change people have to be our priority because they are the most important and different from other animals as spiritual beings. The special relationship we have with our Creator, unlike even that of great apes, is how she interprets dominion. Maggie recommended we read Saving Paradise to find our answer and emphasised our need to listen to God in silence. John interpreted dominion as a responsibility to use Creation within the purposes of God, also emphasising the centrality of people to this responsibility. Ruth contested this with an emphasis on the interdependence of the whole living world in which it makes no sense to to suggest separating people from the rest of Creation. Ian suggested that lordship is a more helpful term than dominion because we can then understand that in the light of Christ's lordship: washing his disciples feet. He emphasised the entirely different social context of the writers of the Old and New Testaments compared with our own. He too argued that the perceived dichotomy between the human and natural world is false and in God's kingdom the most powerful are the least important.

When asked what are the key decisions to be taken to avert climate change from the point of view of their expertise. Ruth stressed the importance of embedding an ecological perspective into every academic discipline. Ian explained that politicians want to know more precisely the consequences of climate change in particular regions so that this has become the focus of his department's research. Paula emphasised the priority of responding to those in poverty right now. John also focussed on the global food crisis and trade problems and the need to address poor governance to restore this. Maggie in contrast argued that our society is much too oriented on action, emphasising the need for silence and reflection. She referred to the medically recognised condition of 'deprivation of nature psychosis' and the fact that even looking at a photo of the natural world has been proved to reduce stress levels. She argued that what makes us human is that which is not human, that which evolved differently from us, and that it is a huge mistake to assume that animals do not have a sense of the numinous since we do not know this - like many other assumptions it comes from a perspective of dominance even when we do not intend it. So she pleaded for more silence and more time in the natural world. In connection with this Mark Dowd recommended watching Into Great Silence.

There followed questions from the floor, including 'will we meet our 2020 target on reducing emissions?', to which Ian depressingly reported that global emissions are continuing to rise exponentially and that there is 'not the slightest evidence that global carbon emissions are reducing'. He pointed out that Britain has reduced its emissions from industry only by exporting that industry while continuing to consume just as much as before. Maggie added a harrowing picture of the consequences very visible in Alaska where the skies are orange with pollution from China, the heavy metal pollution which gravitates to the poles is threatening the survival of some sea mammals and a possible reason for the absence of male babies.

What should we be doing?
Ruth answered that politicians need to be made to take the radical actions required to back up what they're promising, but that they claim they don't yet have a mandate for such difficult decisions as carbon rationing. Apparently Ed Milliband has said that he wants a campaign like the 'Make Poverty History' to make this happen. Mark reported that in an attempt to achieve this Operation Noah would be launching their ARK campaign the following Saturday in Cardiff. (I failed to hear the news that day but have been unable to track down coverage by mainstream media on the internet disappointingly). Paula suggested that more talking is still needed - the church has yet to find its prophetic voice. Ian pointed out that in an affluent society people have a false perception of risk, not believing the threatened consequences of climate change can really happen and many people don't understand that science is largely about dealing with uncertainties, all of which makes getting the message across very difficult.

Afterwards there were a range of workshops.
I attended one designed for members of eco-congregations to discuss ideas. There was a very heartening number of people in the room. It turned out that there were two people whose churches already had the award, and two others who were in the process while the rest wanted to know more about the concept.

Over lunch I browsed the variety of stalls (especially Tilehurst Horticultural Association) tried to find out where to buy charcoal produced from the woodland of our favourite BBOWT nature reserve on the river Pang (in the picture above) and caught up with a few friends. Unfortunately I had to leave then but there were more workshops in the afternoon.

The Bright Field
I have seen the sun break through
to illuminate a small field
for a while, and gone my way
and forgotten it. But that was the pearl
of great price, the one field that had
the treasure in it. I realize now
that I must give all that I have
to possess it. Life is not hurrying

on to a receding future, nor hankering after
an imagined past. It is the turning
aside like Moses to the miracle
of the lit bush, to a brightness
that seemed as transitory as your youth
once, but is the eternity that awaits you.