Fishing on the Sea of Galilee 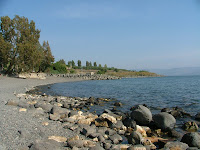 In Exclaimers we were looking at the calling of the first disciples and particularly at Simon Peter. We included various fishy games, discussion about following Jesus then and now, and a look at some photos of the Galilee and the church over Simon Peter's house now. We concluded by talking about fishermen today - even in Britain it is a dangerous and poorly paid job.
According to the Environmental Justice Foundation, on the coast of West Africa fishermen are starving as foreign pirate trawlers dredge up kilometres of sea-bed, only to throw back 90% of their catch dead into the seas. I showed them a can of 'sustainably fished' tuna as an example of the response we might make to this. We then discussed the plight of the fish themselves and other marine life around our own shores. I explained about the imminent Marine Bill. Following this Andy and Zach enthusiastically collared as many congregation members as they could over coffee, explaining about the need for marine reserves and asking them to sign the Wildlife Trust's petition on them.