'Age of Stupid' and a meat debate 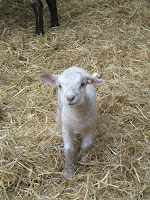 In this morning's announcements I said Rosemary and I would be attending the People's Premiere of the Age of Stupid this afternoon. It's a film starring Pete Postlethwaite in a 2055 world devastated by climate change, wondering why the human race were too stupid to act when they had the chance to avert it. We weren't expecting it to be very cheery but planned to give up this beautiful sunny afternoon for it as we'd been advised that the more people turned up for the premieres the more cinemas would book future showings. However, when I came to book tickets this afternoon I was delighted to find there was only one seat left. So, I do still plan to attend when it comes on general release next week, but this afternoon I booked our nearest Common Wheels car and took the family out to see the lambing at Rushall Organic farm instead (we were not the only congregation members there).

After the service Jeremy and Rachel were discussing their thoughts on trying to eat vegetarian and local food from now on, asking us which we prioritised since trying to do both could end up rather boring. I have to admit that for us it's the vegetarianism that came first and aiming for local food is secondary. I found myself thinking that perhaps a bit of local organic meat would actually be a good idea, especially since I understand from a recent Riverford newsletter that organic meat farmers are particularly suffering as the credit crunch prompts supermarkets to focus on cheap meat, factory-farmed (and often foreign factory-farmed with far lower standards than here). I've never cooked meat in my life because I turned veggie as a kid, but it's something I might dare to consider since it has long been my feeling that eating meat per se is not wrong, just the way we usually do it in the west (in terms of animal welfare and wider environmental consequences).
Posted by Joanna