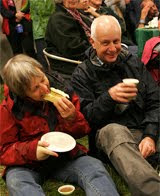 As usual a large group from St John and St Stephen's attended Greenbelt this year, many camping with members of our vicar's former church.

Last year I was disappointed by the sudden disappearance of the climate change issue. This year, as a CEL speaker noted, it was still scarcely on the speaker agenda. Nonetheless, perhaps still rubbing bruises after Copenhagen, it was very much an issue in the G-Source tent and similar spaces: Cafod are getting us to sign postcards to George Osborne, urging him 'Don't drop the ball on climate change' ahead of the talks in Durban later this year. Unicef are asking us to persuade the Chancellor and Climate Change Secretary to 'Get Children Climate Ready' by using a Robin Hood Tax and a tax on shipping and aviation fuels to provide the money that has been promised to help poor countries deal with the effects of climate change. The Salvation Army had a very family-friendly tent where they explained some of the actions their international development organisation are taking to help the most vulnerable to make responsible use of their resources and to adapt to climate change as well as urging people to make changes in their own lives and support Stop Climate Chaos. The Christian Aid tent was a fantastic rainforest venue with lots for the children to do and very much more high-tec cafe than the one I used to volunteer in! The picture of Richard and Rosemary above is taken from Christian Aid's website. There was a display (with accompanying excellent harvest festival materials) highlighting the development of saline resistant rice and crab farming that was being introduced to help Bangladeshi farmers cope with flooded fields and my seven-year-old was very enthusiastic to join in the photo petition to David Cameron asking for more action on climate change.

There were of course lots of specifically environmental groups in the G-Source tent too. Christian Ecology Link's session there was well attended and entertaining as well as inspiring. They suggested that our response to the catastrophe facing the planet might be charted according to the traditional graph of the grieving process - awareness, reaction, denial, frustration, letting go, testing, search for meaning, integration - and that a lot of us were at the lowest morale point 'letting go', needing to move forward. As well as being persuaded to take the plunge and look properly at their EcoCell scheme, the principal message I took home was the importance of working with others. There was also a useful workshop on Transition Towns which was attended by about a hundred people.
Posted by Joanna