marked Environment Sunday with a service celebrating biodiversity. The service began with an explanation of biodiversity. The theme was chosen because this is the UN International Year of Biodiversity – a crucial issue at a time when it is estimated that every six hours another species of plant, animal or micro-organism becomes extinct.

The first part of Adam and Eve’s story was read out from a beautifully illustrated children’s book by Jane Ray: The Garden of Eden. There followed reference to the valuable role of our own gardens in preserving biodiversity as well as bringing us closer to God. The congregation divided into groups to look at exhibits borrowed from – each was a case containing an animal that lives in an oak tree, ranging from squirrels and a jay to a stag beetle and many moths. The groups were invited to think about where their specimen belonged in the web of biodiversity and what it might reflect about its Creator.

At the confession the taking of forbidden fruit was compared with taking too much of the earth’s fruits today. Finally it was remembered that God has a habit of choosing those seemingly least fitted for God’s tasks, giving us hope that despite past form we humans can care for our planet: a meditation on Psalm 104 concluded with references to recent conservation successes. Meanwhile many of the children present had been fashioning wonderful creatures out of ‘magic maize’.

Only when I wrote out that summary did I realise I'd perhaps tried to cram a little too much in! The 'stuffed animals' caused concern among some of the adults, although they were happy to have moth boxes. The feedback afterwards was great as several had taken the accompanying museum notes to their groups and wanted to share some of the amazing facts they'd learnt. The children all sat around the storyteller as she read from Jane Ray's book (and images appeared on the screens for the adults), but otherwise most were very industriously colouring and making their own dragonflies, moths etc (I assume from the number of stag beetles that they were listening in with at least half an ear to the rest of the service), but we'd brought them right into the middle of the half circle in which we worship, beside the worship leader to make them feel more part of the service.

In case anyone would like to adapt prayers we used I'm copying the confession and intercessions at the foot of this post.

After coffee seventeen of the congregation set off on a gentle and sociable cycle ride concluding with a picnic beside the canal. A similar number joined them in shared cars for the picnic. I couldn't make this myself, hence the photo above is only of the departure, but apparently it was a 'really happy time' with two or three participants who hadn't cycled in years now considering more cycling. Below are a couple of photos taken after the service: people had a chance to look at the objects not shared in their group and these are a very small sample of the children's creativity.

Creator God we have not tended your garden as we should

We have let the rainforests be burnt down

Your poorest people and many of your creatures are suffering and will suffer more because we choose what is easy, what seems cheap, what we are told is fashionable

For all this we are sorry

Help us to find ways to live lightly

Teach us to look after your world

We lift up to you the wildlife trusts, Kew Gardens, the Natural History Museum and all those here and abroad who are working to protect the biodiversity of your planet, grant them inspiration, courage and strength.

We ask you to guide the leaders of our nation and of the world in all their responsibilities.

We lift into your loving arms all those who are weary and heavy laden – all those who need to feel the wind in their hair and the grass beneath their feet – lead them beside still waters metaphorical and real, we pray. 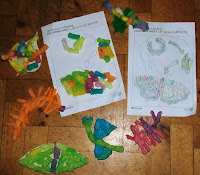