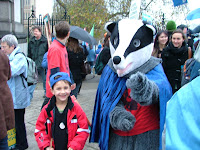 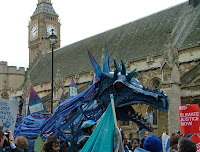 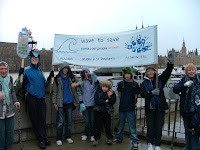 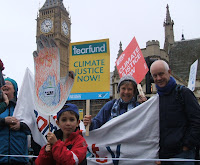 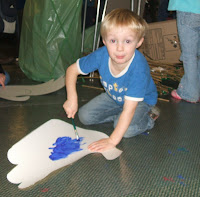 It feels like we've been talking about this all year - the day of The Wave finally arrived. This was the Stop Climate Chaos Coalition demonstration in London just ahead of the Copenhagen Climate Summit.

Preparations at St John's began a few weeks back when the Pathfinders made their splendid banner. Then this Friday sixty cyclists turned up at the cafe - they'd come from Bristol and had stayed the night at St George's, Wash Common in Newbury en route to the Wave. They'd asked for a stopover for toilet and coffee but they got bacon butties for breakfast too courtesy of the Friday cafe.

Today about 25 of us headed down to London by less strenuous means - coach and train. When last I looked the BBC were reporting 20,000 marchers, Sky News said 40,000 but SCCC and Christian Aid said 50,000. Some of us arrived early enough for the service in Westminster Central Hall. The key phrase one of them reported from the service was that God told us to preach good news to all the world - not merely all people, but the cosmos.

By the time our family turned up there was a capacity 3,000 people inside and still an optimistic queue, but we headed downstairs for the Cafod children's activities, bumped into several old friends and the St John's Pathfinders, played climate change games, made banners and got blue hands painted on our faces (plus a good cup of coffee). Making a three-year-old walk the full route seemed a bit optimistic so while most people headed off to Grosvenor Square for the rallying talks and march start, we had a picnic and then visited Westminster Abbey. By the time we came out marchers were passing Parliament. The highlights for the boys were a wonderful blue dragon, meeting Tearfund's Super Badger and the cycle-powered music.

The rest of the congregation did walk the full route. The Pathfinders met our bishop, Stephen Cottrell, on the march (a photo of that should be appearing soon on the church's new website: http://stjohnandstephen.co.uk). There was more a storm of noise than a wave of hands at 3pm and the marching continued long after (we were on the platform at Waterloo when a friend rang to say they'd reached Parliament Square).
Posted by Joanna