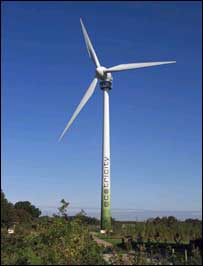 According to The Good Shopping Guide, one third of our country’s carbon dioxide emissions come from power stations (the biggest single source). Consequently Christian Aid and Tearfund have teemed up with suppliers of renewable energy to persuade us to reduce the emissions that are causing climate change and the consequent tragedy for the world’s poorest people:

According to the report of the Intergovernmental Panel on Climate Change, unless urgent action is taken now the world faces these consequences:
250 million people will be forced to leave their homes between now and 2050.
Acute water shortages for 1-3 billion people (ie up to half the world’s population)
30 million more people going hungry as agricultural yields go into recession across the globe
Sea levels edging towards increases of up to 95cm by the end of the century, submerging 18% of Bangladesh.

Our church’s current electricity supplier is Scottish Power. Scottish Power ranks top among the major power companies in the UK according to a WWF survey of their environmental efforts. However, none of these major companies even figure in The Good Shopping Guide’s green energy tariffs because their efforts to green their act are negligible in comparison with genuine green energy suppliers. Should we be changing our supplier?

I asked one of our congregation who works with renewable energy for an explanation of 'green electricity':
Green electricity - a bit of background. A few years ago the government introduced the Renewables Obligation. This requires suppliers of electricity in UK to obtain a certain percentage of it from renewable sources. This percentage is increased every year, and was 7.9% for 2007/8, and will be 15% in 2015. Someone generating renewable electricity receives from the government (actually through OFGEM, Office of Gas and Electricity Markets) a Renewable Obligation Certificate, or ROC, for each unit of electricity. These can be traded, so suppliers that fail to generate enough renewable electricity can purchase ROCs from other generators. At the end of each year, suppliers have to submit ROCs for the required percentage of the total electricity they have sold, and if they fail to meet the obligation they are fined a certain amount per unit (kilowatt-hour, kWh), set by the government. This fine effectively sets the premium in price of renewable electricity over conventional electricity generated from fossil fuels. It was 3.43p/kWh (or £34.3/MWh) in 2007/8. In practice, ROCs trade at a higher price, because no-one wants the bad publicity of being fined.

The problem with most ‘green’ tariffs from electricity suppliers is that they charge a premium for green electricity, but are actually just selling you part of the renewable electricity they are obliged to generate anyway. So it just gives them extra profit, while giving the appearance that they are doing their bit for the planet. It is ‘green-wash’, makes no difference to the environment whatsoever, and should be illegal.

The ideal tariff would be one in which those subscribing to green electricity would be guaranteed that the company would supply this in addition to its renewable obligation. There is not a single major power company that does this. There are, however, some small, specialist suppliers who do guarantee additionality, such as Good Energy.

There are some companies who use the money generated by green tariffs to invest in more green generation, such as NPower’s Juice tariff. It does some good, and is better than nothing, but does not really tackle the problem head on.

There is a good website to compare both prices and how ‘sound’ the various tariffs are at www.greenelectricity.org

All genuine green tariffs cost more, but not a lot more.

I asked him about Christian Aid's recommended supplier, Ecotricity

Ecotricity seem good. They have two tariffs, New Energy and New Energy Plus. The latter is 100% renewable (and so better, but more expensive), the former is not. Ecotricity’s benefit is that it is investing in renewable generating capacity. Their website is a bit crafty, in that it is not easy to find out that their standard tariff (New Energy) is not 100% renewable (it is about 25%), and they dismiss people some other good renewable suppliers because they are not building renewable capacity, even though many of the other suppliers are 100% green supply. But they are a reasonable choice, and actually quite a bit cheaper than Good Energy, even for the 100% green tariff.

My family changed our own electricity supply to Ecotricity several years ago and didn't notice any difference in price. So I rang up Ecotricity and Good Energy to find out about their business rates and was shocked to discover that changing to the cheapest option would almost double our bill. Would it be appropriate stewardship to make this change? Those of us in the Eco-congregation green team have decided that even at this cost it is still 'the right thing to do'.

In our proposal to the PCC we argue:
Given the impact of our carbon dioxide emissions upon the lives of the world’s poor it is hard to justify not acting. Already almost half of India’s children are undernourished. The early church was a radical social and political institution, centuries ahead of the rest of ‘civilisation’ on issues such as care for the poor, women’s rights, appropriate responses to violence or the personal worth of slaves. Surely we should be at the forefront of constructing the society in which civilisation is still possible without oil. This is the kind of prophetic gesture the church needs to be making.

If we do decide that we must change our supplier, we also need to decide how we propose to pay for this:
Make a yearly one off request for ‘on average £10 per congregation member’ specifically for this issue, with an appropriate brief reminder in the service of the vital importance of this to the world’s poor?
Make it the recipient of several worship together meal collections?
Organise a specific fundraising event for it?
Any other suggestions?

Others on the PCC may see our stewardship obligations differently - I'll keep you posted.
Posted by Joanna